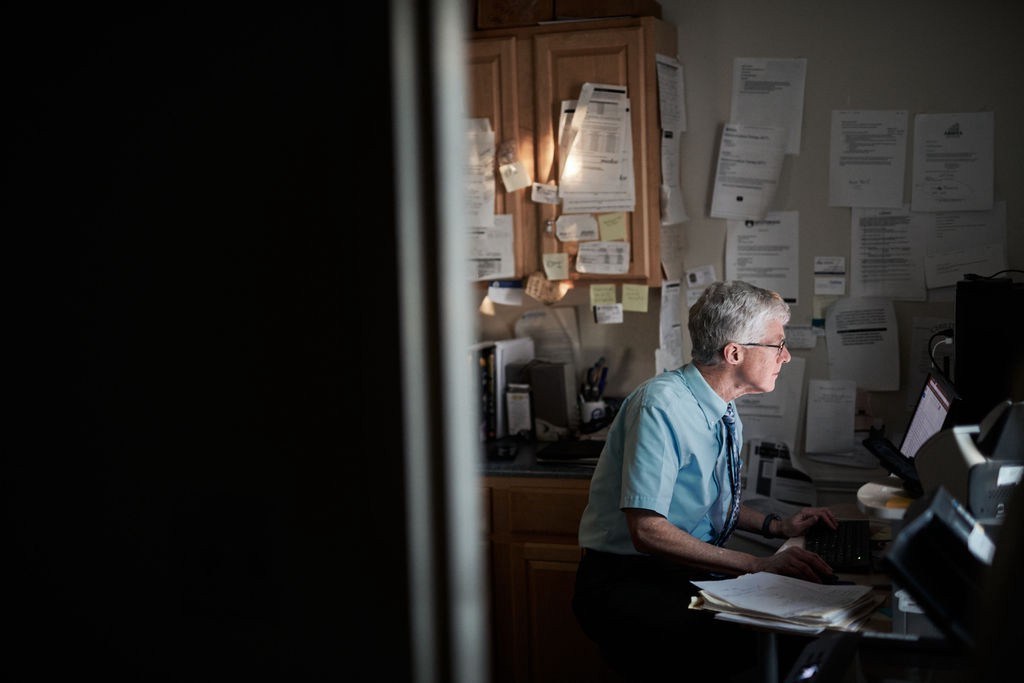 In Fredericksburg, Virginia, the daily newspaper resembles that of most small cities. There are serious stories about crime and schools, angry letters from residents, and puff pieces on pets and kids. Every Sunday, the Free Lance-Star publishes something found nowhere else in the country: a cartoon inked by its neighborhood physician.

“Doctor!” a patient in one sketch shouts, “I’ve got a suspicious mole!” Nearby, a bewildered physician’s eyes bulge toward an animal — the mole — wearing sunglasses. This one-panel take on the misadventures of a doctor in a complex, comical medical system is typical of Steven Mussey, M.D., who has been writing and illustrating the cartoon, “Adverse Reaction,” since 2002.

While his hobby is unique, his challenges are not. Dr. Mussey is an independent primary care physician who sees at least 25 patients per day. Across primary care, as many as 79 percent of physicians are battling symptoms of burnout, with administrative burden increasing as the market consolidates. New regulations and reimbursement requirements further the problem. All considered, primary care physicians, including Dr. Mussey, don’t have it easy. Cartooning provides Dr. Mussey a release. The creative process enables him to analyze his work through an uncommon lens. Art also empowers him to continue serving his community, which includes patients who so respect Dr. Mussey that some refuse to take medications prescribed in the hospital until he signs off. At age 61, he’s not even considering retirement. His hobby, it turns out, strengthens his profession and helps heal his patients.

“I find what I’m really angry about in the medical scene, and there’s usually something kind of funny about it,” Dr. Mussey says of how he finds inspiration for his cartoons. “Then you feel that you’ve spoken your mind, so you don’t become a grumpy old man.”

Burning Out in a Big Practice

In high school, Dr. Mussey became interested in medicine after observing his own family practitioner. The doctor knew his patients by name. His Northern Virginia office was small but cozy, and his wife was the receptionist. “There were a couple of times when he let me follow him around,” Dr. Mussey, a lifelong math whiz, recalls. “And I said, ‘That’s what I want to be.’” He went on to earn his medical degree from George Washington University School of Medicine. After completing a residency in internal medicine in 1988, he practiced in the U.S. Air Force for four years.

When Dr. Mussey left the service, he didn’t follow the footsteps of his role model. Instead, he joined a large multi-specialty practice, unaware of how different it would be from his adolescent vision of medicine. The arrangement was neither romantic nor in the best interests of his patients. It was a grind.

“I never felt like I really knew my patients well because they might see someone down the hall the next visit, and then another physician the next visit,” he says. “When they came back to me, I couldn’t remember them anymore, so I had to go back and look at my notes and figure them out.”
After six years, he began to believe that his patients deserved better. Physicians were missing clues that could improve care. Dr. Mussey had grown tired and stressed. He felt like he was punching the clock, not making a difference. The job security was there, but his dream of running a meaningful, tight-knit neighborhood practice was not. Viewed from today’s perspective, he was likely at risk of, if not already experiencing, physician burnout.

He shared his dissatisfaction with a colleague, Lisa Sarber, M.D., and the pair decided to take a risk, opening their own practice just a few minutes from downtown Fredericksburg.

A Doctor You Would Want To See

Now, with a handful of employees and enough patients to keep them busy, Dr. Mussey and Dr. Sarber oversee a thriving independent primary care practice. After hours, they discuss the same problem that led them to open their own practice. Primary care, Dr. Mussey says, is losing its personal touch due to consolidation and the loss of independence. Large practices are often designed to pass off the patient rather than help them get well, spurning physician well-being in the process. The partners ask the tragic, critical question: If physicians are burning out and leaving medicine or, in even more devastating cases, dying by suicide, who will be left to treat patients when they need care? Dr. Mussey has no magic formula for nailing down independent primary care. Following the advice below has helped him build a successful practice that revolves around the well-being of the physicians and community-minded care.

Many people with Dr. Mussey’s artistic skills might have contemplated a career in animation. He once landed a TV commercial, after all. But he was always intent on treating patients, his neighbors. They depend on him to guide them through a healthcare system that is too often confusing and impersonal. They respect his expertise and appreciate that he brings his personality into his practice. In exchange, his patients provide inspiration for Dr. Mussey’s cartoons — the creative outlet he uses to navigate the perils and pitfalls of medicine. Similar to the pulmonologist who plays ice hockey or the cardiologist who writes music, Dr. Mussey’s hobby helps him navigate his days full of patient visits, inflated drug prices, and a healthcare system that, though trying, isn’t delivering what patients — or physicians — truly need.

“I do think you need to keep a hobby that you love,” Dr. Mussey says, “and try to be a doctor who you would want to go see.”